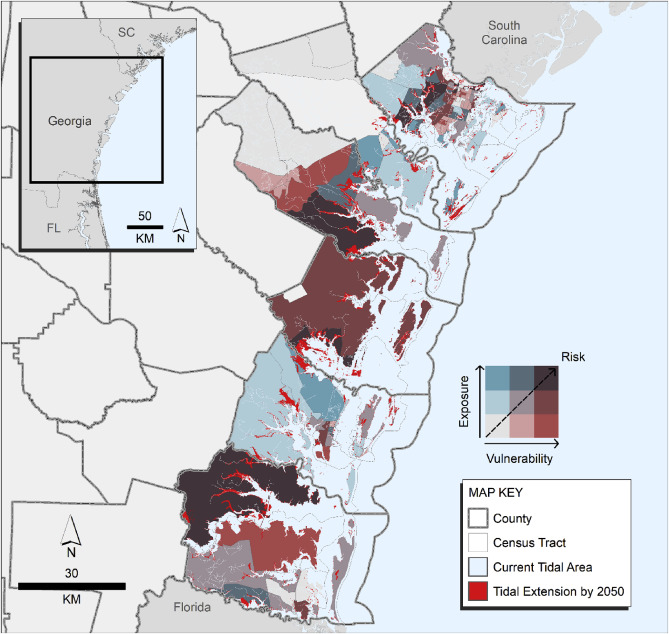 Rising seas will impact millions of coastal residents in coming decades. The vulnerability of coastal populations exposed to inundation will be greater for some sub-populations due to differences in their socio-demographic characteristics. Many climate risk and vulnerability assessments, however, model current populations against future environments. We advance sea-level rise risk assessments by dynamically modeling environmental change and socio-demographic change. We project three scenarios of inundation exposure due to future sea-level rise in coastal Georgia from 2010 to 2050. We align the sea-level rise projections with five population projection scenarios of socially vulnerable sub-populations via the Hamilton-Perry method and the theory of demographic metabolism. Our combined fast sea-level rise and middle population scenarios project a near doubling of the population exposed, and a more than five-fold increase for those at risk (i.e., residing in a census tract with high social vulnerability) and most at risk (i.e., high social vulnerability and high exposure) compared to the same estimate based on 2010 population data. Of vulnerable sub-populations, women had the largest absolute increase in exposure for all scenario combinations. The Hispanic/Latinx population’s exposure increased the largest proportionally under the fast and medium sea-level rise projections and elderly people’s (65+) under the slow sea-level rise scenario. Our findings suggest that for coastal areas experiencing rapid growth (or declines) in more socially vulnerable sub-populations, estimates based on current population data are likely to underestimate (or overestimate) the proportion of such groups’ risk to inundation from future sea-level rise.