The Suburbanization of Food Insecurity: An Analysis of Projected Trends in the Atlanta Metropolitan Area 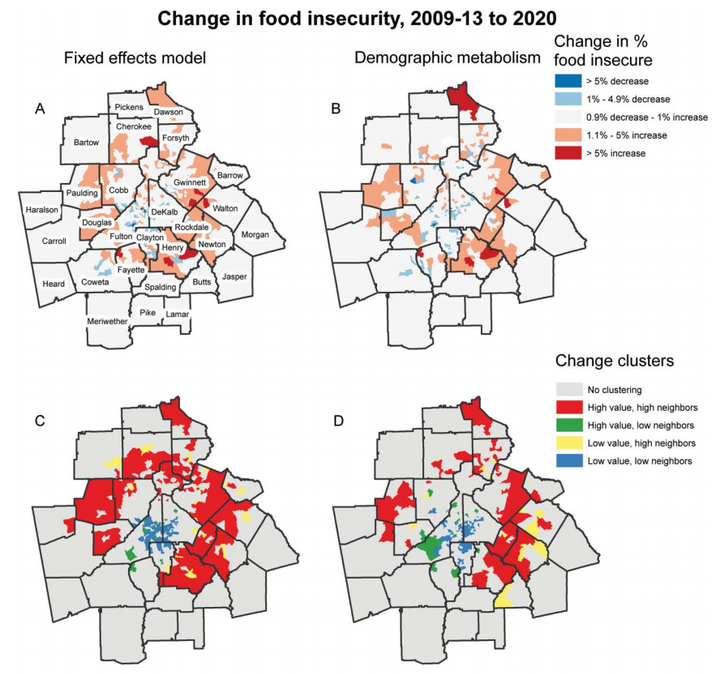 Although general patterns of food insecurity in the United States are known, few studies have attempted to estimate small area food security or account for ongoing socioeconomic changes. Here we address these issues by producing small area estimates of food insecurity in the Atlanta metropolitan area using two methodologies: fixed effects modeling and demographic metabolism. In both cases, we use county-level data from the Current Population Survey to determine the association between food insecurity and demographic predictors. These associations are then applied to tract-level data from the 2009 to 2013 American Community Survey and projected data for 2020 to create small area estimates of food insecurity. We find broad consensus between our two methods. For both time periods, food insecurity is highest in southern sections of the city of Atlanta and its neighboring suburbs. Projections to 2020, however, show that food insecurity rates are projected to increase in outer-ring suburbs east and west of the city while decreasing in the urban core. These results highlight the need to further adapt antihunger efforts for often sprawling suburban communities, where poverty rates are increasing but spatial mismatch combined with poor transit access might hinder access to food assistance.