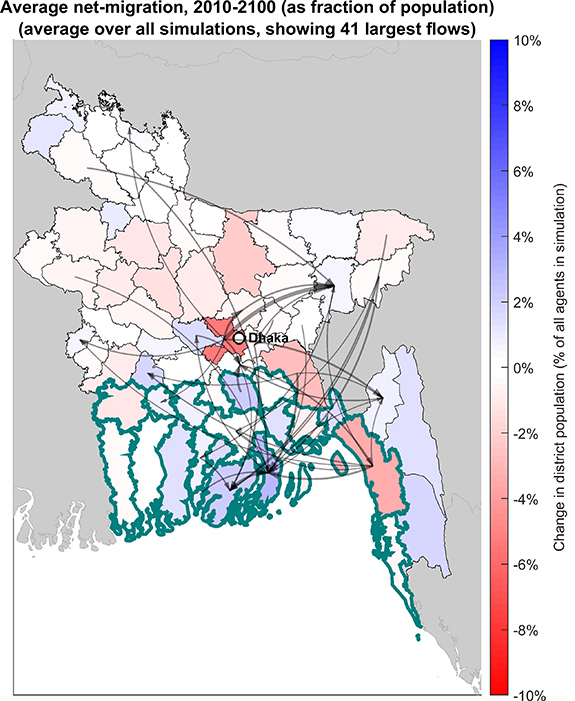 To date, projections of human migration induced by sea-level change (SLC) largely suggest large-scale displacement away from vulnerable coastlines. However, results from our model of Bangladesh suggest counterintuitively that people will continue to migrate toward the vulnerable coastline irrespective of the flooding amplified by future SLC under all emissions scenarios until the end of this century. We developed an empirically calibrated agent-based model of household migration decision-making that captures the multi-faceted push, pull and mooring influences on migration at a household scale. We then exposed ~4800 000 simulated migrants to 871 scenarios of projected 21st-century coastal flooding under future emissions pathways. Our model does not predict flooding impacts great enough to drive populations away from coastlines in any of the scenarios. One reason is that while flooding does accelerate a transition from agricultural to non-agricultural income opportunities, livelihood alternatives are most abundant in coastal cities. At the same time, some coastal populations are unable to migrate, as flood losses accumulate and reduce the set of livelihood alternatives (so-called ‘trapped’ populations). However, even when we increased access to credit, a commonly-proposed policy lever for incentivizing migration in the face of climate risk, we found that the number of immobile agents actually rose. These findings imply that instead of a straightforward relationship between displacement and migration, projections need to consider the multiple constraints on, and preferences for, mobility. Our model demonstrates that decision-makers seeking to affect migration outcomes around SLC would do well to consider individual-level adaptive behaviors and motivations that evolve through time, as well as the potential for unintended behavioral responses.