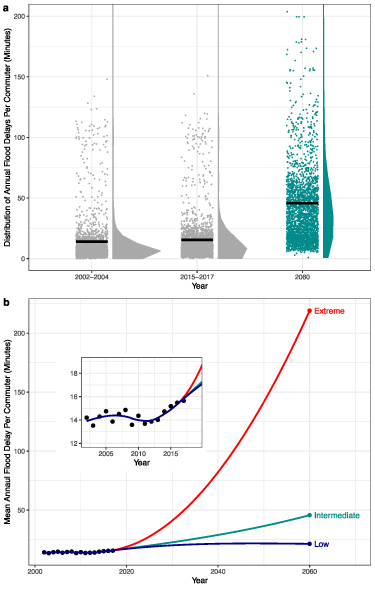 Sea level rise increases coastal cities’ exposure to tidal flooding and elevates the risk of transportation routes being compromised at high tide. Using Miami, Florida as a case study, we combine tide gauge, elevation, road network, and worker location data with a route optimization algorithm to model how tidal flooding affected commute times between 2002–2004 and 2015–2017. Results suggest tidal flooding increases annual commutes by 15 min on average and 274 min among the most heavily impacted areas. Additionally, approximately 14,000 commuters may be unable to reach their workplace due to tidal flooding at least once per year. Accommodation via dynamic adjustments in residential and work locations may reduce tidal commuting delays by as much as 70%, particularly among the highest earners. Many of the most affected areas do not experience flooding directly, expanding the purview of vulnerability beyond simple residential risk. Using 2060 extreme sea-level rise scenarios without accommodating behavior, mean annual commute delays are expected to reach 220 min with over 55,000 commuters potentially unable to reach their destinations.